Picasso painted Visage gris foncé au chapeau blanc (Femmeau chapeau) during his approximately ten-year partnership (1943 – 1953) with Françoise Gilot. She was pregnant at the time and gave birth to their son Claude just a few weeks later on 15 May 1947.

In contrast to the first half of the 1940s, the war years, which meant occupation and constrained living and working con- ditions in Paris, for Picasso the post-war years meant political optimism, ourishing artistic endeavour and new personal relationships. Nonetheless, he was repeatedly the target of criticism from a nationalistic French press and art scene, which took umbrage with his style and his depiction of the human body. Untold variations on the human body and the head testify to Picasso’s creative energy, described by Werner Spies as trying out “every conceivable modality of deformation”. In portraying and characterising specific individuals, the artist was not necessarily bent on achieving a discernible likeness.

In contrast to the vibrant colours seen in the two portraits of Marie-Thérèse Walter in the collection of the Hilti Art Foundation (cat. 15 and 16), Visage gris foncé au chapeau blanc is restric- ted to a dark palette in black and white. Picasso pictures a woman with a white hat saucily perched on her head, setting a strong accent in the almost black ground of the painting. The artist had a penchant for painting his models with extravagant headgear, a liking fostered particularly by Dora Maar, his mistress from 1936 until 1943, when he met Françoise Gilot. Maar much enjoyed sporting the great variety of hats made by her mother, a fashion designer.

Visage gris takes both a linear and sculptural turn while the col- ouring clearly follows a painterly trajectory. In keeping with the multiple views of Cubism, eyes, nose and pro le point in entirely different directions. The mouth features conspicuously, taking the shape of two circles, a device first introduced in a portrait of Marie-Thérèse Walter (1932). More explicitly accentuated in the portraits of Françoise Gilot after 1944, circles begin to appear as delicate parts of the lower lip and as highlights, before gradually acquiring a life of their own and nally representing the lower lip altogether, without any additional contours.

The pictorial space is cryptically implied by the mere hint of a window, a mirror or a picture frame, as well as a piece of square furniture. It communicates an atmosphere of silence without resonance. Unlike Renaissance and Baroque portraits, the com- position does not lead to a unity of gure, space and outside world. Quite the opposite: the sitter, isolated in stark, hermetic darkness, is thrown back on herself. This ultimately existential situation, at an in nite remove from time, acts as a stark foil for the coquettish and short-lived trendiness of the hat. The art- ist’s delight in extravagant shapes applies not only to the hat but, in playful irony, to the deformed physiognomy of the face as well. Although this face brooks no psychological reading and is, in fact, open to any interpretation, it is clearly informed with an expression of alert existential awareness. 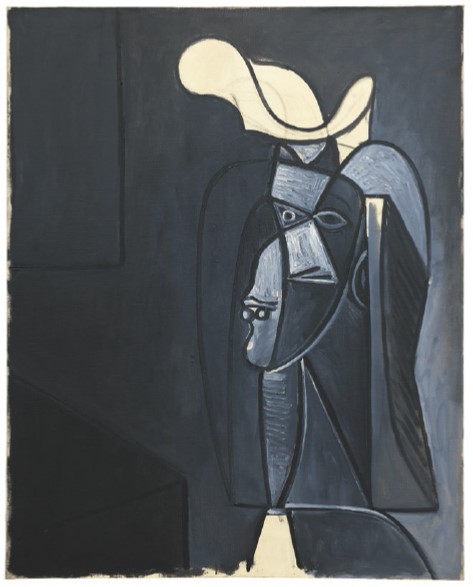