In the course of his artistic career, from his youth until his death, Max Beckmann repeatedly portrayed himself in drawings, prints, paintings, and sculptures. Like the self-portraits of other great artists, these works bear witness to the physical appearance and mental state of a creative person within the context of ever-changing life circumstances. Reflecting these circumstances, marked by artistic success as well as private and social recognition, but even more so by two world wars, professional banishment, exile, and emigration, Beckmann depicts himself in a diversity of attitudes: self-confident or vulnerable, sublime or devastated, argumentative or melancholic, clear-sighted or gloomy. But no matter how he related to the «Lord’s great, eternally changing world theatre» with all its passions and longings, conflicts and miseries, his interest in the «mystery of being», which always included himself, never waned.

When he painted his Selbstbildnis mit Glaskugel (Self-Portrait with Crystal Ball) in 1936, Beckmann was still living in Berlin but considering emigration to the United States. Three years earlier, shortly after the Nazi party had come to power in Germany, he had been relieved of his teaching post at the Art Academy of the Städel Museum in Frankfurt. He was slandered in the press for his “degenerate” art and his paintings were removed from the walls of Berlin’s Kronprinzenpalais, a section of the National Gallery of Modern and Contemporary Art.

He did not succeed in immigrating to the United States. But in 1937, immediately after Hitler’s radio speech in Munich on the opening of the Grosse Deutsche Kunstausstellung, Beckmann and his wife fled Berlin and settled in Amsterdam, which was occupied by German troops in 1940. After ten years of oppressive exile, they finally immigrated to the United States on 19 August 1947.

This brief biographical sketch reveals the circumstances under which Beckmann painted his Selbstbildnis mit Glaskugel. What would follow the extremely bleak present? To investigate the future the artist uses a crystal ball, an instrument of divination, turning himself into a seer and a soothsayer. Beckmann had always been responsive, across eras and cultures, to anything that would further knowledge and insight into the various guises of reality. His reading encompassed, religion, philosophy, mythology and belles lettres. Esotericism and occultism captivated him. Anything of significance could become the subject matter of his art.

The crystal ball quietly rests in his hand, gently pressed against his chest. Light falls on his face and on his high forehead, but his eyes are deep in shadow. His grave, pensive gaze looks both inwards and out into the dark room that fades into infinity and uncertainty beyond the looming figure of the artist and the open door behind him, which frames his head like a nimbus. By eliminating all narrative detail, Beckmann, seen only with the attribute of a seer and soothsayer, appears suspended from the reality of the times. He has devoted his painting to the timeless subject matter of the unswerving recognition of truth with both mind and eye. This challenging work of art lends the artist a near prophetic aura. Hölderlin, one of the many writers in Beckmann’s library, once wrote, «Yet in the man a god has his dwelling, too, so that he sees what is past and to come.» This thought reverberates in Max Beckmann’s paintings. 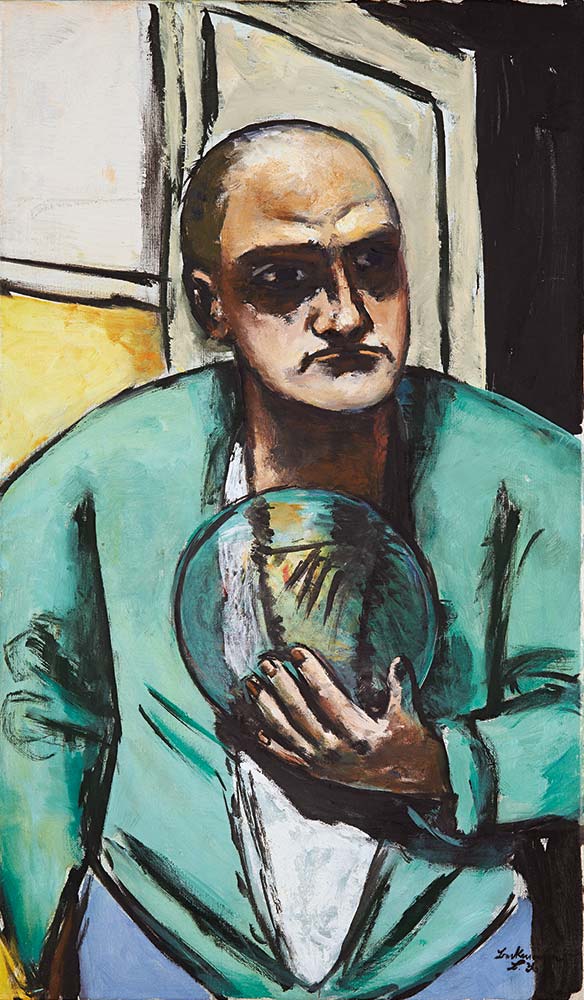