The genre of the still life is associated with the thought that all things earthly are transient, and Corinth’s painting Apfelblüten und Flieder (Apple Blossoms and Lilac) of 1920 is no exception. No matter how exuberant the rendering of the apple and lilac branches, their beauty is inevitably of brief duration. The first petals already lie scattered next to the vase on the table. The elongated branches have been placed in a crystal vase, according to Charlotte Berend-Corinth’s brief description in the catalogue raisonné of her husband's paintings, which she wrote and published in 1958. She also mentions the white tissue paper underneath the vase as well as a box of watercolours with paintbrush and a glass of water. In addition, we learn that Corinth painted this still life at Klopstockstrasse in Berlin, where he had been living and working since 1901.

From the letters Corinth wrote or received, published in a documentation by his son Thomas Corinth in 1979, we learn about the specific circumstances of pictures painted around 1920. Thus, for example, an importexport businessman from Hamburg commissioned still lifes of flowers in exchange for the delivery of foodstuffs, such as cocoa, sugar and coffee, which were in short supply in Germany after the First World War. Apfelblüten und Flieder may have been one such painting although the title is not explicitly mentioned since, as a rule, the client gave the artist carte blanche in his choice of subject matter.

Still lifes, depicting flower arrangements in particular, are the most prolific genre in Corinth’s late oeuvre, amounting to more than seventy paintings. Like his series of Walchensee landscapes, they demonstrate the artist's extraordinary mastery and freedom in the treatment of colour. From the very beginning, colour played a crucial role in Corinth’s compositions, as also revealed in his history and genre paintings. As in Junge Frau mit Katzen of 1904 (cat. 6), Apfelblüten und Flieder combines darker hues with a light, Impressionist palette. At the same time, the pigments, applied with great sensitivity and a nervous hand, invest the painting with an air that would seem to show more affinity with Expressionism than with Impressionism. Basically, Corinth addressed the great themes of painting with a temperament as sensuous as it is robust. A stroke in 1911 which paralyzed his left side, critically undermined his vitality. After physically recovering and returning to his art, Corinth suffered gradual, insidious change described by his wife, in 1920 – the year he painted this picture: “His state of mind was very unsteady. Time and again he was in despair, sensing that he had not achieved what he had set out to do.” The slanting, unsteady stroke of the brush and the dissolution of all con-tours lend the subject matter of Corinth's late work a transience that seems to consume all substance and, upon looking at his last self-portraits, even the artist himself. 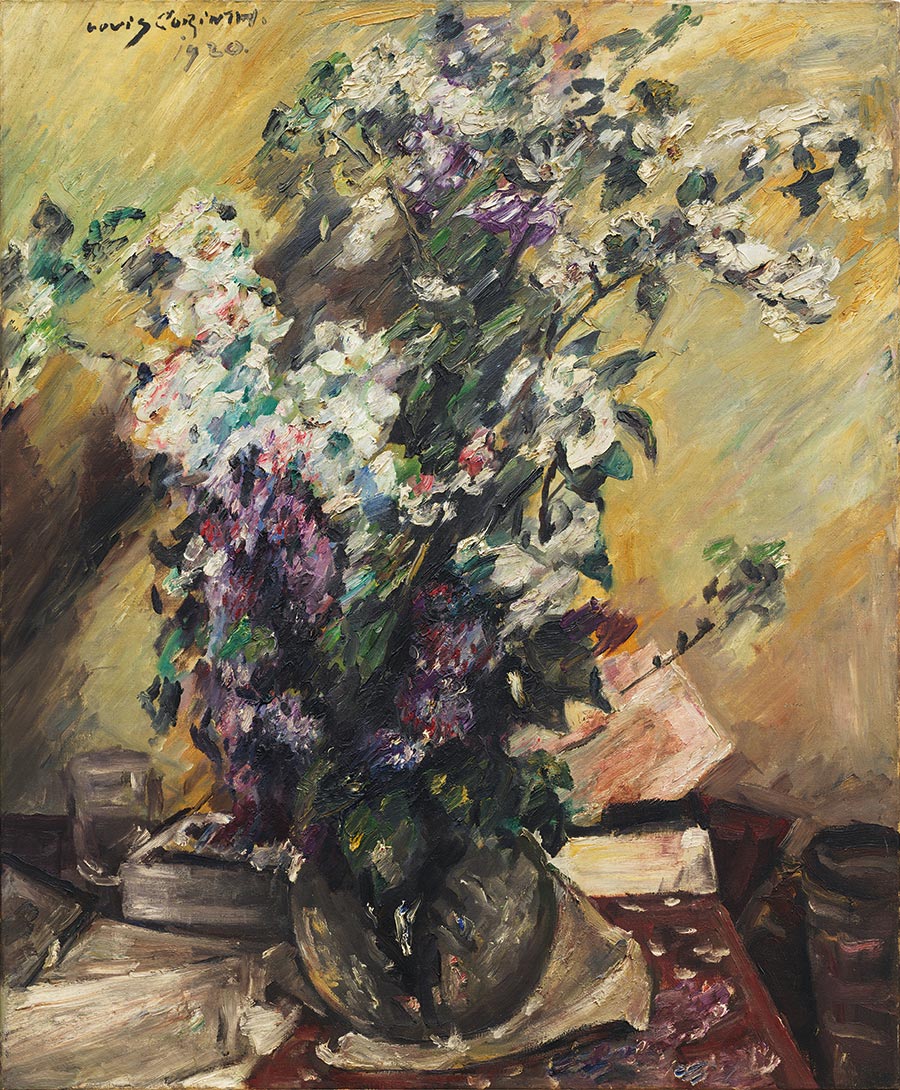